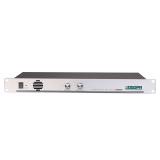 Network PA system is based on internet and built in modules and layers. It is an integrated and intelligent PA system. The system is digital transmission and realized by Lan. The transmission distance can reach more than 10 kilometers. The configuration of this system can take advantage of the existing LAN system, and is time &cost saving. The combination with the LAN makes it possible for interaction function, which the traditional PA system unable to realize. Unlike traditional PA system which is only able to transmit information in one direction and control in station, this network system make it possible for interaction function due to its combination with LAN system. The network PA system center is able to connect to multiple terminals, such as, play terminal, on-demand terminal, paging terminal, one-touch emergency alarm terminal. The system center has the function of player, zoning, pre-amplifier, timer, equalizer, and powerful audio matrix, etc. The network PA system can be applied to different occasions, such as, airport, port, university, school, large gathering site (e.g. Expo), stadium, industrial park, park, railway, highway, etc.